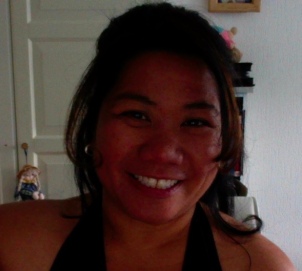 Rochita Loenen-Ruiz was born and raised in The Philippines. She grew up in the mountains of Banaue, Ifugao during the  Marcos era. Rochita started reading at a young age, when she ran out of books to read at home, she and her sister made visits to the home of a Canadian missionary who kindly lent them as many books as they could read for a week.

Her first exposure to fantasy was through reading The Chronicles of Narnia by C.S. Lewis. The first science fiction story Rochita read was about a robot who had lost his master and wandered throughout the galaxy in search of the boy who owned him. She wishes she could remember the title of the story and the author, but the only thing that stuck with her was the robot’s plight and how sad she felt for him each time he was disappointed. If anyone can provide her with the title of this story, she would be very happy.

After completing Elementary school in Ifugao, Rochita attended the Benedictine Abbey School in Manila. In highschool, she took an elective in journalism.

After High school, Rochita went on to study at the University of Santo Tomas’s Conservatory of Music. She majored in piano and studied there for two years, after which she transferred to Philippine Women’s University where she took up piano under Professor Milagros de Ocampo. It was in the Women’s University that she met and studied under Lucrecia “King” Kasilag.  King Kasilag was a National Artist, and is well-known for her daring and for her inclusion of indigenous Filipino instruments in Orchestral works. A true grand dame of Filipino music, it was King Kasilag who awakened in Rochita a strong awareness of culture, heritage, and the drive to move beyond imitation towards creating an own sound.

Filipino writing is realist by tradition and Rochita’s early works: fiction, poetry and creative non-fiction, are realist in nature. Her first short story, inspired by life in the mountains, was published in Philippine Panorama. Her poetry and creative non-fiction have been published in PATMOS (an international publication of the Institute for Studies in Asian Church and Culture), Isip-Isak (the local version of PATMOS), and the Second Hay(na)ku anthology. She has also co-authored an inspirational book for Overseas Filipino Workers entitled Hope Away from Home.

In 2005, Rochita made the decision to embrace speculative fiction as a genre. She joined the Online Writer’s Workshop for Science Fiction and Fantasy Writers. In 2008, Ann VanderMeer selected “The Wordeaters” for inclusion in Weird Tales Magazine’s International issue. This proved to be a key point in Rochita’s career. In the same year, she joined the Villa Diodati Expatworkshop.

Rochita attended the Clarion West Writer’s Workshop in Seattle in 2009. She was the recipient of the Octavia Butler Scholarship in 2009 and was the first Filipina writer to attend Clarion West.

Her essays and reviews have also been published in a variety of venues. She writes a column called Movements which is published online at Strange Horizons.

Rochita currently resides in The Netherlands with her husband and her two children. She is a communications volunteer for a self-help Filipino women’s organization with the goal of empowering Filipinas in the Netherlands and helping Filipinas to integrate into the Dutch society.

From the Beloved Country:

For all its turmoils and conflicts, Philippines continues to be the happiest of lands as far as the author is concerned. It is to this landscape that she returns each time she writes a fiction.

My email address is: rcloenenruiz@gmail.com

As I prefer to speak in person or on the phone, please leave your number or skype details.